We plan our next international travel for 2023. Start saving now & co 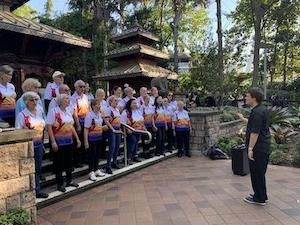 me along!  It's such fun.  The destination or event hasn’t yet been found but we're interested in hearing of trips to investigate.

Every 3 years Voice Weavers choir travels internationally to represent Australia in Acappella performances, to learn from other international choirs of the highest calibre and make a cultural exchange with singers from all around the world. We encourage everyone to experience the thrill of joining VW on an international tour but we do require singers to meet a level of commitment in learning the music and attending the rehearsals.

Voice Weavers sing at a high standard and we usually have up to 30 songs in our repertoire for our tours. Most of the songs are our traditional pop choral arrangements but we also  learn songs native to the countries we visit and frequently sing with local choirs. Final decision on which songs you are able to sing with the choir rests with the Artistic Director.

Singers wishing to join us on tour need to achieve 100 preparation points by doing the following:

We offer a  special membership fee that includes the Weekend Retreat including food, 14 Tour rehearsals, the farewell performance, a VW Polo and walkout hat. This fee is all inclusive, no discounts are available.

In April 2019 we visited Japan touring the cities of Osaka, Kyoto, Sendai, and Tokyo to perform with local choirs and musicians. Highlights included a Music Festival in Osaka, a Charity concert for those affected by the 2011 Tsunami in Sendai and a  Requiem Concert in Tokyo. Check out our tour on Facebook.

In 2016 the choir travelled to Sochi Russia to compete at the World Choir Games, the Olympics of the choral singing world. To break the journey we went via Beijing and Moscow. Our thanks to the Moscow Oratorio Choir who hosted our performance at the Hermitage Gardens and joined us on stage for a heart felt performance of Bogoroditse Devo and to Viki Smirnova who volunteered to give us a behind the scenes tour of Moscow. Hugs to Yulia  Akulova our choir wrangler in Sochi.

If you want to get an idea of what we did and saw on our tour, here are a few links to some video compilations made by some of our members.
Part 1 Beijing (3mins) | Part 2 Russia (3mins) | WCG Sochi (6mins) | Gorge yourself (33 mins)

In 2013 the choir travelled to Hoi An, Vietnam for the 3rd Vietnam International Choral Festival.


In 2010 the choir travelled to Shanghai, China, to sing at the world fair that was being hosted in the city that year.